Get pampered by the genuine and kind service of our Les Clef d’Or Concierge team. Let us take care of every detail during your stay, whether it being a transfer, guided tour or a reservation for a special dinner at Amsterdam’s most sought after restaurants.

Get to The Dylan
Surroundings
Parking
Hotel brochure

Our Les Clefs d’Or Concierges are pleased to offer suggestions and to accommodate any special request to enhance your stay at The Dylan. From car service, bikes to explore the city or a canal cruise, to rose petals strewn in your room following a gastronomic dinner at Michelin starred Restaurant Vinkeles. Should you require any assistance with transfers, (valet-) parking, please reach out to our concierge team prior to arrival. Read our concierges’ recommendations in The Dylan Mag.
Get in touch Get to The Dylan

The Dylan Hotel Amsterdam can be easily reached by car (private car, taxi or E-taxi) and public transportation. Cars can be parked along the canal or in parking garages. For guests staying at the hotel, valet parking is available by prior arrangement.

The Dylan Amsterdam is one of Amsterdam’s most desirable and prestigious locations overlooking the Keizersgracht canal. Set within the “grachtengordel”, the city’s central canal-belt, as well as in Amsterdam’s chic shopping district, “The Nine Streets” (“De 9-straatjes”), The Dylan Amsterdam provides the ideal base from which to explore the distinct wonders and historic charm of the Low Countries most intriguing city.

Read more in The Dylan Mag In 1632 the architect Jacob van Campen was commissioned to build a stone theatre. Monday, the 11th of May 1772, turned out to be a black day in Dutch history. During a performance, the building caught fire and completely burned down. In 1773 the site was sold to one of the Regents of the Roman Catholic Church charities, known as the Old & Poor People’s Office. This foundation retained ownership until 1998 when the building was completely renovated and it emerged as a luxury boutique hotel, in 1999.

The nearest secured parking garage is Q-Park Europarking. Valet parking is available for hotel guests at € 95 per car per 24 hours. 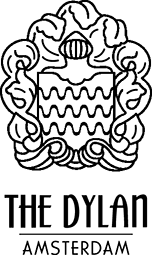 Treat someone to a Dylan Experience! Gift a set value, a High Wine Experience or a special overnight stay. Order your gift card online and we’ll wrap it up shortly.